The very first known case of Zika fever was in a sentinel rhesus monkey stationed on a tree platform in the Zika Forest in Uganda in 1947. Population surveys at the time in Uganda found a 6.1% prevalence. The first human cases were reported in Nigeria in 1954. A few outbreaks have been reported in tropical Africa and in some areas in Southeast Asia.

The first major outbreak, with 185 confirmed cases, was reported in 2007 in the Yap Islands of the Federated States of Micronesia. A total of 108 cases were confirmed by PCR or serology and 72 additional cases were suspected. The most common symptoms were rash, fever, arthralgia and conjunctivitis, and no deaths were reported. The mosquito Aedes hensilli, which was the predominant species identified in Yap during the outbreak, was probably the main vector of transmission. While the way of introduction of the virus on Yap Island remains uncertain, it is likely to have happened through introduction of infected mosquitoes or a viraemic human with a strain related to those in Southeast Asia. This was also the first time Zika fever had been reported outside Africa and Asia.

In 2013 another large outbreak was reported in French Polynesia that was thought to be from an independent introduction of the virus from Asia than the Yap Island outbreak. 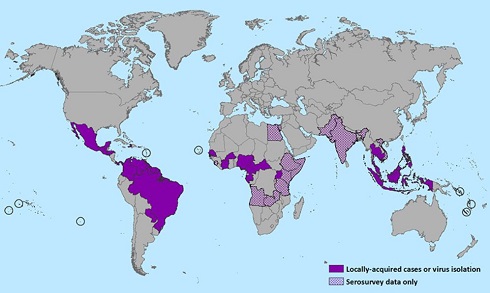 Figure 1: Countries that have past or current evidence of Zika transmission (as of January 2016). Adapted from CDC. The CDC has a comprehensive site describing countries and areas with active Zika virus transmission.

2015-2016 outbreak
Genetic analyses of Zika virus strains suggest that Zika first entered the Americas between May and December 2013. It was first detected in the Western Hemisphere in February 2014, and rapidly spread throughout South and Central America, reaching Mexico in November 2015. In 2016 it established local transmission in Florida and Texas. The first death in the United States due to Zika occurred in February 2016. In May 2015, Brazil officially reported its first 16 cases of the illness. Although, a case of illness was reported in March 2015 in a returning traveller. According to the Brazilian Health Ministry, as of November 2015 there was no official count of the number of people infected with the virus in Brazil, since the disease is not subject to compulsory notification. Even so, cases were reported in 14 states of the country. Mosquito-borne Zika virus is suspected to be the cause of 2,400 possible cases of Microcephaly and 29 infant deaths in Brazil in 2015. Before the Zika outbreak, only an average of 150 to 200 cases per year were reported in Brazil. In the state of Pernambuco the reported rates of microcephaly in 2015 are 77 times higher than in the previous 5 years.

On 24 January 2016, the WHO warned that the virus is likely to spread to nearly all countries of the Americas, since its vector, the mosquito Aedes aegypti, is found in all countries in the region, except for Canada and continental Chile. The mosquito and dengue fever have been detected in Chile's Easter Island, some 3,500 km away from its closest point in mainland Chile, since 2002. In February 2016, WHO declared the outbreak a Public Health Emergency of International Concern as evidence grew that Zika is a cause of birth defects and neurological problems. In April 2016, WHO stated there is a scientific consensus, based on preliminary evidence, that Zika is a cause of Microcephaly in infants and Guillain–Barré syndrome in adults. Studies of this and prior outbreaks have found Zika infection during pregnancy to be associated with early pregnancy loss and other pregnancy problems.

In 2016 imported or locally transmitted Zika was reported in all the countries of Asia except Brunei, Hong Kong, Myanmar and Nepal. Serological surveys have indicated that Zika virus is endemic in most areas of Asia, though at a low level. While there was a sharp rise in the number of cases of Zika detected in Singapore after the 2016 Summer Olympics in Brazil, genetic analysis revealed that the strains were more closely related to strains from Thailand than from those causing the epidemic in the Americas.

2017-present
Zika transmission persists, but has generally been at low levels throughout 2018 to the present. On 21 September 2018, the Ministry of Health and Family Welfare-Government of India (MoHFW) reported a confirmed case of Zika virus infection in a 78 year-old woman in Jaipur, Rajasthan state, India. State health authorities initiated a broad response and central teams were subsequently deployed to support surveillance and control efforts, particularly in and around a 3 km radius of the Shastri Nagar area. As of 2 November 2018, 157 cases have been identified, including 63 pregnant women; all cases have been laboratory-confirmed by RT-PCR.

Video 1. WHO: Zika virus spreading to almost all the Americas.

You can also make a donation by PayPal and support the Zika Virus Net website.